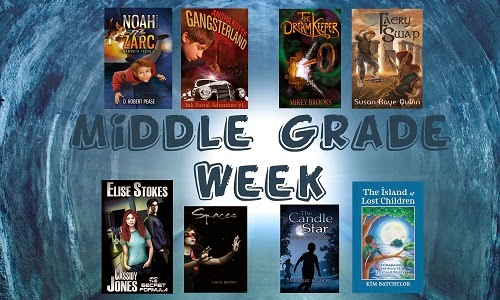 This week is all about Middle Grade: writing it, indie publishing it, and especially marketing it! As you may know, reaching those elusive middle grade readers is tough, doubly so when you’re indie published. Plus there are giveaways (see below)!
Here’s the schedule:
MONDAY:
Warrior Faeries and Math Magick: How Susan Kaye Quinn is using a Virtual Author Visit video and Teacher’s Guide to reach readers with her MG novel, Faery Swap.
TUESDAY:
Faery, Fairy, Sweet and Scary: a discussion with MG author Kim Batchelor on writing about Faeries in kidlit.
WEDNESDAY:
Sci Fi for the Middle Grade Set: a discussion with MG author Dale Pease about writing SF for kids.
THURSDAY:
Writing Indie MG: a roundup of indie MG authors (Michelle Isenhoff, Elise Stokes, Lois Brown, Mikey Brooks, Ansha Kotyk) about why they write MG and how to reach readers, including their indie MG author Emblazoner’s group catalog.
FRIDAY:
Marketing Indie Middle Grade – The Hardest Sell – about reaching MG readers as an MG author.
Faery, Fairy, Sweet and Scary
with Susan Kaye Quinn and Kim Batchelor
Most of us are introduced to Tinker Bell and fairies as cute but contentious little creatures that, if we are lucky, we might find in the bushes outside our window. But in the Irish and Scottish myths that gave birth to these creatures, they were not always sweet or cute. The original faerie (or fairie, if you will) stories came from myths about the Tuatha Dé Danann, a race of people in Irish Mythology gifted with supernatural powers. Fairies were known as aos sí, aes sídhe, or simply the sidhe, and some—like the banshee or bean sí—were in mythical reality faeries who wail near those close to death. (And hence the term “screaming like a banshee”.) Yikes! Imagining (and reimagining) those faeries has been happening in literature ever since. Today, Susan Kaye Quinn and Kim Batchelor chat about the kind of faeries they have in their middle grade fantasies, and where the inspiration for those stories came from.
Sue: Kim, you have the classic Tinkerbell fairy in your Peter Pan re-imagining, The Island of Lost Children. But first, tell me a bit about your (not yet released) book, The Mists of Na Crainn, and how you imagined the fairies in that story.

Kim: Several years ago, while driving home after an evening of teaching, I learned a few things about fairies that I never knew. Throughout the journey on a long stretch of highway, a Celtic music station played a series of eerie songs in recognition of the night before Halloween. Faeries kidnap mothers and their babies and take them to caves where they are held captive. Listen. When it’s completely quiet, you can hear their songs calling out to you to rescue them. “You’re part fairy, aren’t you?” Somewhere on the drive, that line came into my mind and gave birth to the story that would later become my book, The Mists of Na Crainn (not yet in print but hopefully soon). Imagine learning that you were part of a race of people prone to stealing women and babies, among other bad practices, and you never knew it. That became Lyric Doherty’s story, and in the book I introduced her to her classmate, Andrew, whose mother, along with his brother, also went missing, never to be found. I loved writing about a mythical place coexisting alongside of the world as we know it.
Sue, your book, Faery Swap, takes those fairy myths to a completely different level. In your story, this mythology is clearly situated in our world, with tension, conflict, and adventure suitable for the middle grade reader. The two boys at the center of the story and conflict each find themselves located on an unfamiliar side of the rift between the Otherworld and our world. Where did the inspiration for your story come from?

Sue: I was also driving in the car, oddly enough! (That’s where I seem to find many of my ideas!) I wanted to write a middle grade fantasy, but with science elements. With my background in science and engineering, I always like to bring some of that into my stories – and I love the intersection of the mystical and the scientific because, to me, science is magical! Not only because today’s mysteries are tomorrow’s science, but because the idea that we can understand how the universe works by applying our minds to it is wondrous to me!
Kim: I love how you combine science and magik. I work in clinical research, so science is important to me, too. In The Mists of Na Crainn , “pixies” have taken over all the leadership positions in the Village Na Crainn and banned the teaching of all but the most rote and boring information. In pursuit of what they’re not being taught, Andrew introduces Lyric and her friend Saoirse to the Arbor Fair, where forbidden knowledge on science and math combine with the fantastical.

Kim: How do your characters combine the two?

Sue: In Faery Swap, my warrior faeries use knowledge (specifically mathematics and science) to enhance their faery powers – they command the elements but also a dimensional magick just by virtue of their birth as faeries. But their powers are increased when they acquire new knowledge about how the universe functions. In the story, the faeries travel from their Otherworld to Earth, swapping places with humans to steal their knowledge and bring it back to the Otherworld. Our knowledge is literally their power… and I love the message that sends to kids. (Along with a rollicking good fish-out-of-water adventure for both my faery and human protagonists!) Kim, what kind of powers do your faeries have, and how does that affect their interactions with humans?
Kim: Our knowledge is their power. That’s literally fantastic. In The Mists of Na Crainn, Fairy have the ability to “soar” in the wind, melt into and move through the mists, use potions, and through a strong connection with nature have the ability to manipulate it, for ill or good.  The anti-science “blunt thinkers” not only affect village life, they have a connection to the evil forces in the Otherworld, where Lyric searches for her mother.
In Island of the Lost Children, Belatresse the Fairy can fly, shrink down in size (she’s slightly smaller than most children) to fit into a pocket uncomfortably, and, of course, influences child archers to shoot unsuspecting 12-year-old girls out of the sky. Human children know it’s best to stay out of her way, or can easily divert her attention with a couple of packets of granulated sugar.
Sue: Ok, all those powers sound like tremendous fun! And I love that the anti-science people are “blunt thinkers!” Thanks for chatting faery (and fairy) lore with me today!

Susan Kaye Quinn is the author of the bestselling Mindjack Trilogy, which is young adult science fiction, and several adult fiction stories. Faery Swap is her foray into middle grade, which is her first writing love. Her business card says “Author and Rocket Scientist” and she always has more speculative fiction fun in the works. You can subscribe to her newsletter (hint: new subscribers get a free short story!) or stop by her blog to see what she’s up to.
Faery Swap
Kindle | Nook | Print
Fourteen-year-old Finn is tricked into swapping places with a warrior faery prince and has to find his way back home before the dimensional window between their worlds slams shut. Faery Swap is on tour March 3rd – March 21st with a $25 gift card and magick wand giveaways! Sign up here.

Kim Batchelor writes for children and adults. She writes fiction short and long, real and fantastical, foreign and domestic. Her first published book is The Island Of Lost Children, a re-imagining of Peter and Wendy.

The Island of Lost Children

Kindle | Print
The Island of Lost Children: The story of Peter and Wendy set in modern times.
More Middle Grade Coolness coming up this week! Enter the Giveaway below from all the participating authors!
a Rafflecopter giveaway